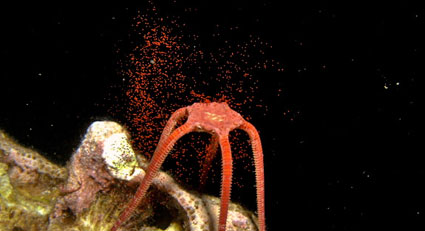 Coral Spawning happens once a year and is one of nature’s most spectacular and rare performances. A handful of guests at Anse Chastanet, St Lucia, are lucky enough to witness this marvel annually as the natural wonder occurs right off the beaches of this charming resort. This year it is predicted to take place from 24th – 26th August.

Once a year, coral release millions of packets of egg and sperm cells that appear as massive underwater clouds of white and pink upward moving “snowfall”.

Each year, Anse Chastanet’s scuba diving team incredibly and accurately predicts the night spawning and prepares to take novice and experienced divers and snorkellers to observe the remarkable phenomenon which turns the seas yellow and pink. It is one of nature’s most spectacular and rare performances.

First discovered in the 1980’s at Australia’s Great Barrier Reef, this annual mass reproduction phenomenon is now known to be critical to coral reef – and our own ecosystem’s – survival. Tropical coral reefs, although out of sight, are essential to our world-wide food chains.

Seven night dive packages at Anse Chastanet for August start at £1,643* per person on a double occupancy basis where both guests are diving. Rate includes full-board, airport transfers, 12 beach or boat dives, dive equipment and non-motorized water sports. Marine park fee of US €15 is to be paid locally.

View some video of the event from last year